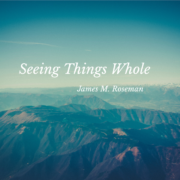 IN ITS MARCH 1990 PREMIER EDITION, the First Things editors laid out their “prejudices” for the new journal, noting by that term they mean “prior judgments,” which they further clarified as “the considered assumptions that frame what we’re going to do and how we’re going to do it.” The editors went on to describe their understanding of the relation between religion in public life under the rubric “first things.” Religion, they said, is prior to public life, in that even “while religion informs, enriches, and provides a moral foundation for public life, the chief purpose of religion is not to serve public life.” It is more fundamental than that. When religion becomes captive to public life it “is of little use to public life.”

Religion best serves public life by relativizing the importance of public life, especially of public life understood as politics. Authentic religion keeps the political enterprise humble by reminding it that it is not the first thing. By directing us to the ultimate, religion defines the limits of the penultimate. By illumining our highest purpose all lesser purposes are brought under transcendent judgment.

What is notable in the statement of the purpose of First Things is its prejudices. That is, that the editors knew that they had them and they were stated, consciously reflected upon and well-considered. The end of the premier edition opening statement says, “At every historical moment, the contemporary is afflicted by the crippling conceit of its utter novelty.” To see this and build upon it is a rare kind of wisdom in our time. It is what makes First Things, and other such journals, so important today. To recognize that there are differences in things, and among those differences the cruciality of priority—and how vertical priority informs the horizontal—is monumental in today’s world. “Religion points us to the last things, framing the final direction that informs our decisions about life, both personal and public. The chief service of religion, then, is to teach us that the first things are the last things.”

This essay is a kind of reminder of first things, not to First Things editors of course, but to us all. As such, for many readers it will be a statement of the obvious. For others, perhaps a renewal.